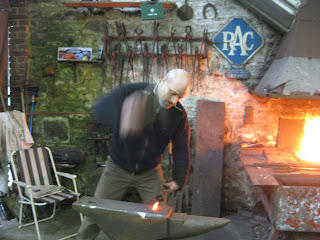 The guy behind the counter at Europcar finally looked up at me after I was standing there for five minutes. “Robert Thomas?” He asked. I nodded, and he directed me to sign on a few dotted lines and then led me outside to the car park. “She only has sixty three miles on her, so be careful”. “Got it” I replied. “You know we drive on the left side of the road, right?” “Until you get into France, then you drive on the right”. “Got it” I said as I jumped in the driver’s seat and drove off. I was fairly excited, and not to be bothered by silly things like international driving laws. I was driving to France to meet and Interview Simon Robinson. This was a true innovator in the world of artistic blacksmithing, and he had invited me to his home and workshop for a face to face interview. He explained that “discussing the trade with experienced smiths was absolutely invaluable to me at this stage of my learning”, and that I should come down and stay at his house with his family if I was able.  I was honored with this invitation and graciously accepted. So, armed with my five-disc set of instructional CD’s on conversational French, and steel toe cap boots just in case, I set out down the M4 to catch the ferry into France. 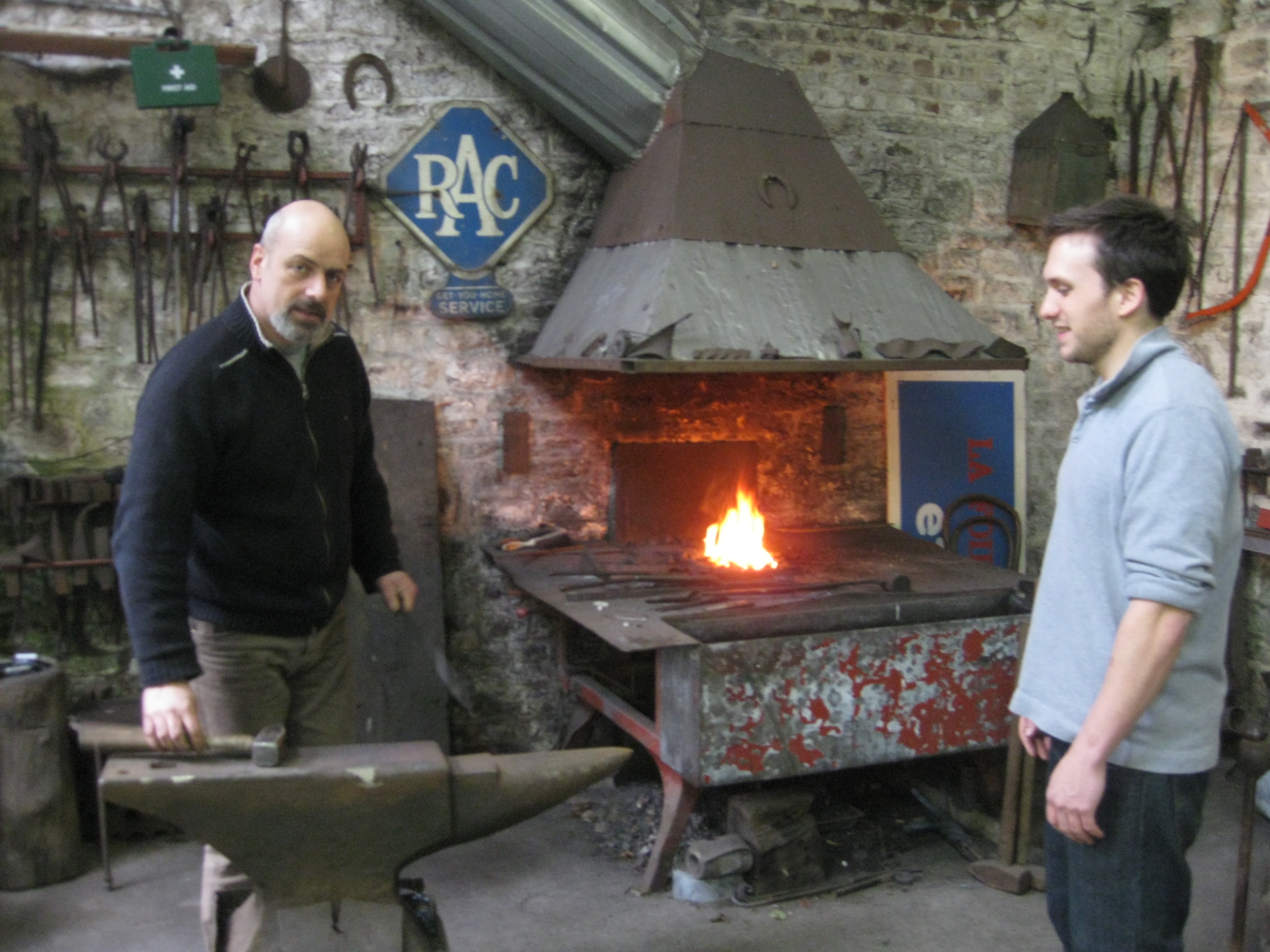 I look on as Simon explains his creative process.

As an eighth-generation blacksmith, Simon had large shoes to fill. Most notably, his father; Tony Robinson was already making huge waves in the metal design world by the mid seventies with his innovative use of stainless steel in sculpture. Since age seven was the age that the Catholic church deemed “the age of reason”, it was on his seventh birthday, that Simon Robinson was allowed to forge his first piece in his father’s workshop. From that point on, he was hooked, spending all his free time in the shop until he took up the craft full time in 1980. Working alongside his father, they created the famed Winchester gates and many other beautiful pieces during that time. To complete his training, Simon embarked on a journeyman tour throughout Europe in 1984. During his travels, he learned from the likes of Freddy Habermann and Hermann Gradinger, just to name a few. It was these experiences coupled with the influence of his father’s style that helped define Simon’s creative process.

Simon’s creative process is based on feeling and emotion. “You must be intimate with the material”, the artist explained to me as he layed across the anvil caressing it like his dance partner in the middle of a passionate dip. “The hammer is your thumb, the anvil your fingers, and you are just to squeeze the material into whatever shape you desire, That's it.” He said very matter-of-fact as if no other factors stood between him and his art. These sentiments seem evident in every aspect of Simon’s work. Unless he has a strong emotional connection to the job, he doesn’t do it . Taking on every task with the same simple and spiritual approach seems to leave a sense of peace in his work as if it is in total harmony with its surroundings.

In recent years, Simon has been investigating the possibilities and limitations of sheet metal as opposed to bar, which is favored by most smiths these days. This fascination is very evident in Annunciation a 2007 commission, which the Artist calls his favorite work to date. Like so many other Robinson works, it is ecclesiastical in nature. The Virgin Mary is depicted at very moment the angel comes down from heaven and asks her to be the mother of Christ.  Using sheet metal and very basic repousse techniques,  Simon creates a life sized picture of a 15 year old girl who has been asked to take on an unimaginable responsibility. Her face shows fear and bewilderment as much as grace.  It is as much an experimentation into the material as an experimentation into capturing human emotion. 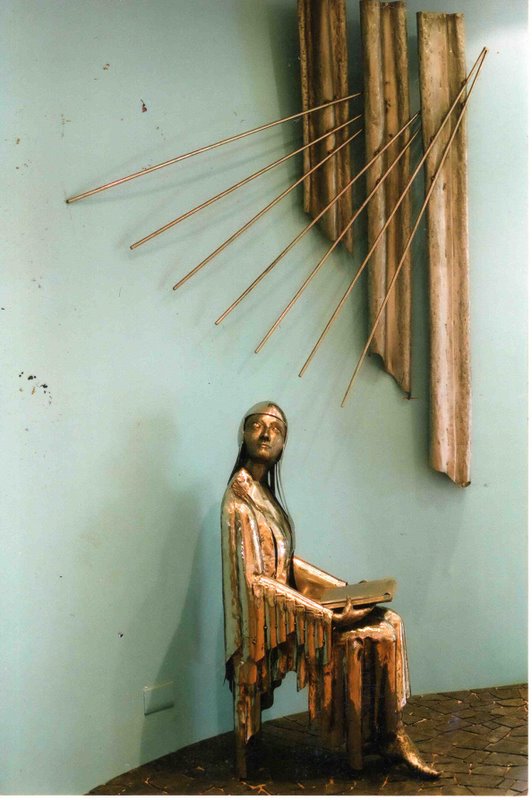 At the end of our interview, I asked Simon Robinson why he chose to use stainless steel as opposed to mild, which is traditionally much easier to work with and favored by most working blacksmiths. He responded by explaining to me that mild steel has been worked for so long that we already know its limitations. “Stainless steel still has many secrets to tell” he said as he sat opposite me sipping french wine at his dining room table. Stainless steel is avoided at all costs by so many artists because of its notorious bad temperament and resistance to being tamed by its sculptor. “The material is uncharted territory” he went on to say. These words resonated with me. It was the fact that no one else would touch it that drew this artist to his chosen medium. Like so many others before him, it seemed Simon Robinson recognized that to be a true artist, one must be equal parts historian and explorer.

To summarize a man like Simon Robinson into a few paragraphs is no easy task, and quite frankly, does not due him the justice he deserves. At 49, he has a more extensive portfolio than many artists can attain in a lifetime. Some pieces shared with his father and some solo designs, but all have distinct style that is unseen elsewhere. When asked what the future holds for Simon Robinson, he answered that he believed the next twenty years would define him as a artist and a craftsman. He has spent nearly half a century developing his personal style, and now was the time for him to reach his true potential, and I believe he will do just that.
To check out more of Simon Robinson's work please check out his website:
Le Forge Robinson
Posted by Unknown at 15:11

Email ThisBlogThis!Share to TwitterShare to FacebookShare to Pinterest
Labels: Research